We invite you to enjoy the paint and the letter created by artists Jennifer Monfrans as part of her great work on women scientists “At least I have you”. 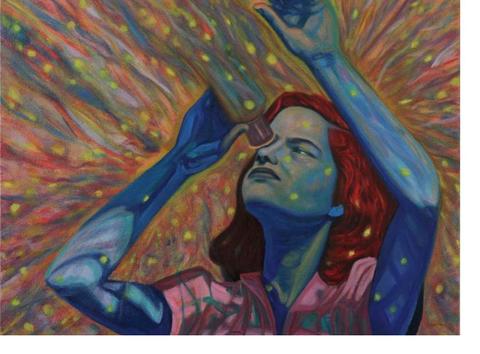 When I arrived at the Palomar Observatory in Southern California in 1964, I quickly realized there was no women’s bathroom. So I cut up a triangle and stuck it on the pants to make a skirt.

I never took opposition as defeat. Even when I was told that Princeton did not accept women, I got my doctorate at Georgetown University while raising four children.

In my work, I examined the rotation of more than 200 galaxies. To my shock, I found that the stars on the outskirts of galaxies were not slowing down; if anything, they were speeding up. By the laws of either Newton or Einstein, it meant that there was extra mass out there where there was relatively little light, mass that was speeding up the stars.

I concluded that the distant regions of galaxies contained considerable amounts of a dense, unseen mass, which affected everything from gravitational pull to the shape of galaxies to how stars move in relation to one another. I discovered dark matter.

Dark matter has not been directly observed, and its precise composition remains unknown, but scientists think it constitutes about 84 percent of the cosmos.

Alfred Nobel’s will describes the physics prize as recognizing ‘the most important discovery’ within the field of physics. Many considered that I should have received the prize. But I think the question is, are there women and have there been women who want to do science and could be doing great science, but they never really got the opportunity?

I am lucky to have had the stamina to conquer my challenges and make a discovery that brings light to matter that affects all galaxies. It is the discovery and not the prize that is the greatest reward.