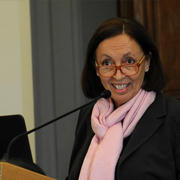 "In addition to providing information on published research, studies and events, GenPORT offers the opportunity to share and exchange knowledge, experiences and good practices for gender equality not only in Scientific, Technological, Engineering, Mathematical (so-called STEM), but also in human and social sciences. The outcome of GenPORT framework is the collective construction of an international gender equality database in the world of science and research.”

She is presently involved in a project aimed to increase digital awareness in women especially in the context of cybersecurity and privacy and in the daily use of smartphones and social networks.

In her role as City Councillor on Innovation at Roma Capitale (2016-2019) she interpreted her mandate with the goal of making the city more inclusive and innovative by encouraging participation and active citizenship, with a particular focus on women participation. In that sense, Flavia Marzano declined the Digital Agenda from a gender perspective.

She is the founder and past President (until July 2016) of the Estates General of Innovation, and the creator and animator of the Wister Network (Women for Intelligent and Smart Territories).

She got her High School Diploma in Rome, and her Master Degree in "Computer Science" at the University of Pisa.