In recent years, there has been an increased focus on more inclusive and sensitive communication. This welcome trend has also encouraged significant changes in various fields, including the academic world. Inclusivity can be generally described as the goal to ensure that various groups are properly represented and not excluded on the grounds of gender, ethnicity, sexuality, disability, age, religion, socio-cultural status, etc. Meanwhile, gender sensitivity is defined by EIGE as the aim of understanding and taking account of the societal and cultural factors involved in gender-based exclusion and discrimination in the most diverse spheres of public and private life. Understandably, the concept is mainly centred on the structural disadvantage in the positions and roles of women. As such, gender-sensitive language is dedicated to combating this disadvantage.

Various European projects on gender equality have tried to address the issue of inclusive and gender-sensitive communication, focusing on scientific communication, access to information, making women and other underrepresented groups more visible, revealing pervasive cultural stereotypes that portray women as less competent for, and dedicated to, an academic and/or professional career. Some projects have also aimed at increasing transparency and inclusivity in the informal decision-making and communication processes in the research units and at enabling/creating an enduring transformation of the organisational culture favouring a more active participation of women in all the decision-making and communication processes. Reviewing and modifying administrative language from a gender perspective (both, speech and writing) has been also on the agenda of inclusive communication.

Similarly, the Gender Equality Seal Initiative, supported by the United Nations Development Program, has published Principles of Gender-Sensitive Communication which aims to provide aid on how to identify sexist language and guidance for inclusive language in written communication as well as visual and audio materials. The document outlines six main principles for written and oral communication: ensure that women and men are represented, challenge gender stereotypes, avoid exclusionary forms, use equal forms of address, create gender balance, and promote gender equity through titles.

In 2008, the European Parliament designed multilingual guidelines on gender-neutral language, with many other institutions following the lead. A document on Gender-Neutral Language in the European Parliament explains that gender-neutral or gender-inclusive language is much more than a matter of political correctness: “The purpose of gender-neutral language is to avoid word choices which may be interpreted as biased, discriminatory or demeaning by implying that one sex or social gender is the norm. Using gender-fair and inclusive language also helps reduce gender stereotyping, promotes social change and contributes to achieving gender equality”.2

In higher education, special attention is given to sensitive and inclusive communication in terms of gender: making sure that the language used by the institution is gender-sensitive, i.e. it addresses all genders or identities in an equally visible and appreciative manner, without discrimination towards one of them. The United Nations’ Guidelines for gender-inclusive language in English offer a number of strategies and best practices that are divided into three sections: using non-discriminatory language, making gender visible when it is relevant for communication, and not making it visible when it is not relevant. The Council of Europe’s tips for gender-sensitive language include the following: use the plural form, avoid “man” words, use feminine forms of professions, use both the feminine and the masculine when addressing people, present women and men’s full names etc.

Many universities have adopted gender equality plans (GEPs) dedicated to ensuring that their communication is inclusive and gender-sensitive. As one of the first universities in Lithuania to approve GEP, VMU aims to ensure gender balance by implementing cultural, systemic institutional and structural changes within the organisation. A separate GEP measure dedicated to communication aims to create an inclusive and equality-oriented organisational culture through the university’s internal and external communication as well as collaboration with social partners.

This measure aims at raising awareness within the University’s community and in the society in general by communicating the importance of equal opportunities and gender equality, diversity and anti-discrimination policy (with regard to gender, race, age, ethnic group, religion and/or faith, (dis)ability, sexual orientation and gender identity, beliefs). Also, it seeks to prevent gender stereotyping and create better conditions for visibility and representation of underrepresented groups. Strengthening the representation of underrepresented groups involves promoting women’s leadership in mass media, internal and external communication by highlighting women’s roles in leadership, management, research and innovation, women’s and other underrepresented groups’ participation in public communication.

Recognizing our role in teaching future generations, this measure involves commitment to being a role model, recognizing that language in the broad sense of the term - communication in all its forms – should advance, not hinder, gender equality and inclusivity. Discussions of gender-sensitive communication often underline that this skill is a must-have for people who will be working on policymaking or in public communication. Therefore, VMU is preparing the Guidelines for Inclusive Communication, which will contribute to the education and professional training of prospective journalists and communication specialists.

For designing the Guidelines for Inclusive Communication, a working group consisting of 17 members has been assembled. The working group includes representatives of the university’s academic and administrative units and people who work with various vulnerable and diverse individuals and social groups (e.g., people with disabilities, people with different cultural and/or religious backgrounds, sexual minorities, etc.). The group’s members are experts and practitioners in disability issues, language, communication, journalism and media studies, intercultural and multicultural education, gender studies specialists.

The first draft of VMU Guidelines for Inclusive and Gender-Sensitive Communication state that Vytautas Magnus University aims to create a safe and healthy environment which is based on respect, attention, and tolerance. This higher education institution upholds the view that each member of the university’s community follows the rules of ethical behaviour, respects one another, ensures the safety and dignity of one another, and is guided by the principles of equal opportunities and inclusion. The general aim of these guidelines is to introduce the entire community of VMU to the recommendations on the use of inclusive and gender-sensitive language, provide the means of more inclusive internal and external communication, conduct communication and language related training for the university’s employees and students, future agents for sensitive and inclusive communication. 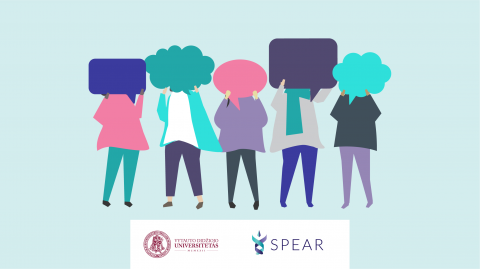