However, the positive figures for research at universities and in the government sector obscure the fact that the situation in individual groups of disciplines has been slow to make progress for many years. This is particularly true in the case of the engineering sciences, which predominate in private-sector R&D. As a result, progress in achieving equality is almost at a standstill or, particularly in the Eastern European countries, is even declining.

The initially encouraging statistics are thus no reason to celebrate – quite the opposite: if we want to achieve real gender equality within the foreseeable future, we will have to develop and implement more effective measures to increase the percentage of women in the R&D workforce.

As part of an international team, we have spent the last three years studying new instruments for promoting gender equality. How can we consolidate the existing knowledge on effective equality measures for operations management personnel in R&D organizations and help them to design and evaluate their programs more effectively? The project “Evaluation Framework for Promoting Gender Equality in Research & Innovation”, or EFFORTI, was financed by the European Commission and ran from 2016 to 2019. Very soon three basic assumptions manifested for our research team regarding smart equality measures:

EFFORTI has created two tools that support equal opportunity officers, program designers and evaluators in deploying equality intervention programs in a more result-oriented and strategic manner. The tools sensitize users to the contextual factors of the programs they have planned and to the potential performance-related effects of the programs.

The Impact Story Knowledge Base is a visually appealing wiki which currently contains 17 comprehensive models for effectiveness based on the latest scientific findings. These Impact Stories can be accessed as complete reports and provide information on potential effects, indicators and conditions for the success of equality intervention measures such as equality plans, career development programs and Gendered User Involvement. Here a bridge is built between the short-term, concrete effects of a measure and its impact both on the respective target group and beyond. For example, career development programs focus in the short term on acquiring certain skills and abilities. In the mid-term frame they are intended to improve the career prospects of the person in question, while in the long term they can have a formative impact on the gender distribution and working culture of an organization.

The knowledge contained in the Impact Story Knowledge Base can also be investigated with a focus on particular equality goals or individual indicators. Operative personnel can consult the Impact Story Knowledge Base for inspiration in designing their own equality intervention programs and can research specific indicators for evaluating the programs. 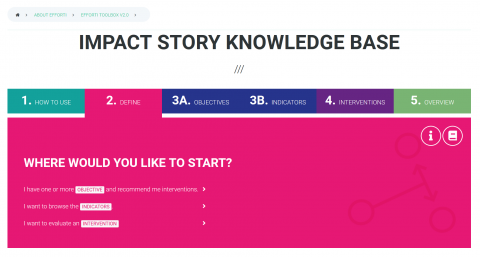 The “Program Theory Generator” supports operation management personnel when developing custom-tailored program theories. Working step by step, the Generator asks which measures are to be conducted and what effects are attributed to them. Matching effects are automatically suggested based on a word search. The result is a visually appealing template which can be used to illustrated the theory of an equality intervention program and present it to its stakeholders. 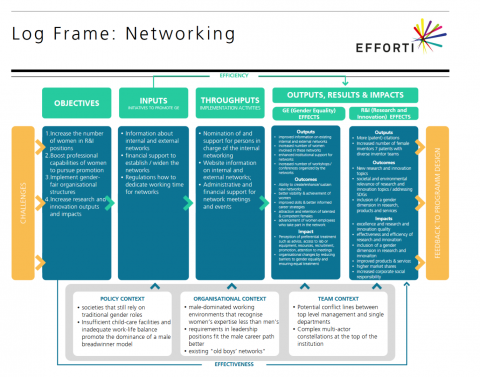 Today a comprehensive range of research findings and a large number of tools are available to equal opportunity officers and diversity managers for the professional development of their measures and programs. These findings are however in part contradictory and the associated tools often require a long initial training phase because of their complexity. The EFFORTI Toolbox offers a compact, practically viable presentation of existing research findings that brings light into the current information jungle. We want to help equal opportunity officers and diversity managers deploy their activities in a more professional and strategic manner and thus make their work even more effective. Share your experiences with us!