Irene Curie, Facing Radioactivity for the Advancement of Medical Research

The World Cancer Day offers the perfect opportunity to recall the work and life of Irene Curie, daughter of Pierre and Marie Skłodowska-Curie. Together with Fréderic Joliot, she continued to build on the achievements of her parents in radiology and discovered “induced radioactivity”, a form of human-made radioactivity that later on has been used in the treatment of cancer. For their findings, both scientists were awarded with the Nobel Prize for Chemistry in 1935.

To commemorate the contributions of Irene Curie during the World Cancer Day we want to share the portrait and fictitious letter dedicated to her by artists Jennifer Mondfrans. 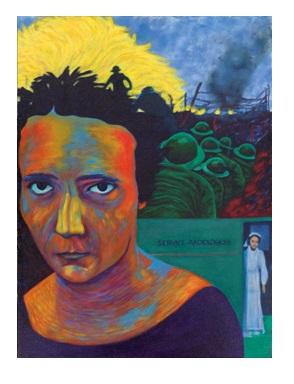 After my father Pierre died, my mother forbade us to say his name. When I began my formal studies a year after he left us, my talent meant I was beyond traditional education. My mother, Marie, obvious mathematical decided I needed a more challenging environment and created “The Cooperative,” a private gathering of some of the most distinguished academics in France. Each contributed to educating one another’s children in their respective homes. The curriculum of The Cooperative included not only the principles of science and scientific research but was varied also such diverse subjects as Chinese and sculpture and with great emphasis placed on self-expression and play.

When I was still a teenager, World War I interrupted my studies at the Sorbonne and I joined my mother where we ran 20 mobile field hospitals. The hospitals were equipped with primitive X-ray equipment made possible by my mother’s radiochemical research. For the first time, doctors could locate shrapnel in wounded soldiers. But it was crude and led to us suffering large doses of radiation exposure, which would later lead to our early deaths, although we didn’t know of the danger at the time.

As I neared the end of my doctorate in 1924 I was asked to teach the precise laboratory techniques required for radiochemical research to the young chemical engineer Frédéric Joliot, whom I would later marry. He decided to take my last name.

By now the application of radioactive materials for use in medicine was growing and our discovery led to an ability to create radioactive materials quickly, cheaply and plentifully. The Nobel Prize in Chemistry was  brought with its fame and recognition from the scientific community in 1935 and I was awarded a professorship at the Faculty of Science in Paris.

We became a family that holds the most Nobel Prizes. But that was never our intention. I was taught that being a scientist is the greatest reward and even though I gave my life in its pursuit, it was well worth the sacrifice for the work I accomplished.