Chien-Shiung Wu, one of the most outstanding physicists of the 20th century

Let's start the new academic year with the fascinating life and discoveries of Chien-Shiung Wu (1912-1997) via the portrait and fictive letter created by the artist Jennifer Mondfrans.

Chien-Shiung Wu (1912-1997) is a Chinese American scientist in physics who made outstanding contributions to the cyclotron particle accelerator, one of the main tools for the current advances in physics. In the beginning of the twenty century she was one of the first women to have access to education in China, and progressively she had became one of most valued physics scientist in the world.

If you want to explore more about women in physics, you are welcome to browse GenPORT resources related to this issue. We also would like to draw your attention in this GenPORT interview with Prof. Dr Ana Proykova in which she exposes different examples on how gender dimension can be also incorporated into research content in physics. 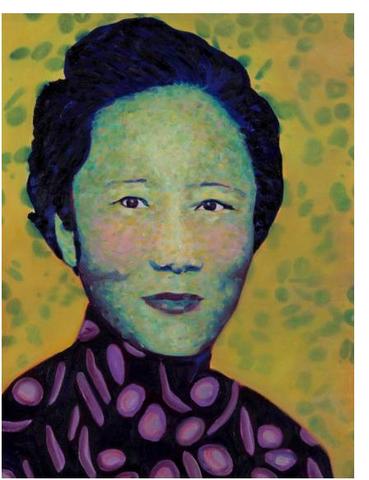 In my homeland of China, women did not have the same rights as men when I was young. But my father believed in me, perhaps that’s why my given name means “courageous hero.” I went to his school that he and my mother operated, but when I was 11, I had to leave for a bigger city to continue my education. When I graduated, I taught school for one year before I could continue on to college. Upon completion, I realized I needed to learn more physics than China could provide and left for the United States.

I had intended to go Michigan, but my steamership landed in California and when I met physicists at the University of California in Berkeley, I changed my mind.

I studied under Ernest Lawrence, who would win the Nobel Prize for his invention of the cyclotron particle accelerator. And I met my husband who was also a physicist. After graduation, we went to the East Coast to find work. After teaching at Smith, I became the first female instructor in physics at Princeton. This was more than 25 years before women could enroll as students.

In 1956, I was working at Columbia, when my colleagues asked if I could think of a way to test a basic law of physics. I did, and decided to carry out the experiment myself. I spent months just preparing and testing my specially-designed equipment.

On the afternoon of January 15, 1957, the Department of Physics at Columbia called a press conference to announce the dramatic overturning of what had been considered a law of physics, known as conservation of parity. My colleagues, Dr. Tsung-Dao Lee and Dr. Chen Ning Yang won the 1957 Nobel Prize in Physics but I was not included.

I did win the Medal of Science, the nation’s highest scientific award. And my book Beta Decay, published in 1965, remains the standard reference for nuclear physicists.

Learning, for me, was life-long. In my later research, I used advanced biophysics to study the molecular changes in hemoglobin associated with sickle-cell anemia.