Emmy Noether, one of the greatest mathematical minds

Emmy Noether was a German mathematician who made important advancements in abstract algebra and theoretical physics. The theorems that she proved about general relativity and elementary particle physics are known as “Noether’s Theorem”.

Her fascinating life and struggles within science are once again available through the portrait and fictive letter created by artists Jennifer Mondfrans.

The history of Emmy Noether is a paradigmatic example of the obstacles many women faced and face to take part in science. She had to overcome social prejudices within and beyond her family in order to do able to do her mathematical work – during a certain period without even being paid or under the name of her male colleague.

GenPORT offers many specific resources dedicated to women and mathematics. Especially noteworthy are these inspiring videos with young women in mathematics (http://www.genderportal.eu/resources/women-maths-university-nottingham) and a blog posts on “how women in maths rock science” written by Kamila Benova. 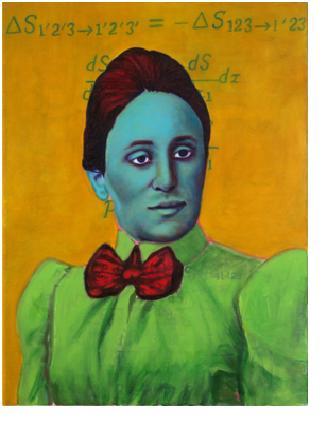 My father was a mathematics professor. Even so, no one thought I could be one. Girls were not allowed to attend the college preparatory schools. Languages, music and knowing how to cook and clean were the only preparation I had for college.

With this education, I knew I had to learn more if I wanted to study mathematics seriously. My attempt to enroll as a student was not approved and I was only allowed to audit classes.

After two years of sitting in on classes, I took the exam to become a doctoral student in mathematics. After five more years, I was granted my doctorate and was ready to teach.

The University of Erlangen had a policy against women professors. Instead, I helped my father at the Mathematics Institute in Erlangen. For seven years, I worked without pay or title and began publishing papers on my research on general, theoretical algebra.

When I met Felix Klein and David Hilbert, I felt understood. They invited me to join the Mathematical Institute in Göttingen and we began working on Einstein’s general relativity theory. Three years later, I proved two theorems that were basic for both general relativity and elementary particle physics. One is still known as "Noether's Theorem."

I could not join the faculty because I was a woman and so I lectured under Hilbert’s name, as his unpaid assistant. Hilbert and Einstein wrote letters on my behalf and they succeeded in granting me permission to lecture under my own name, but still without a salary.

In 1922, after 15 years of working, I finally got a position with a small salary but without tenure.

I had to leave Germany for America in 1933. I wasn’t there long. I died two years later from an infection after having a uterine tumor removed. But I had such a lucky life. My genius was recognized, in my own day. I am known as one of the greatest mathematical minds of the twentieth century. My conceptual approach to algebra led to a body of principles unifying algebra, geometry, linear algebra, topology, and logic. Even with the same obstacles, I would do it all again to experience the beauty of mathematics.