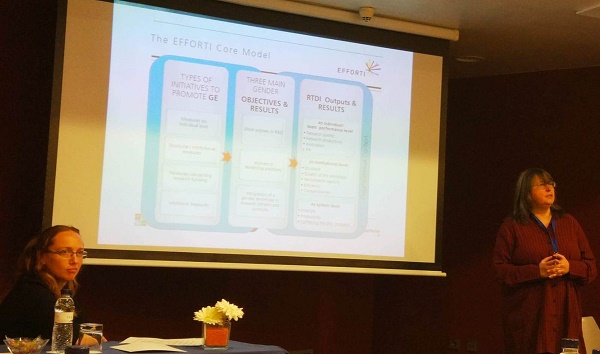 These online discussions will focus on three main aspects of the research undertaken within the
GEDII project:

Dr. Vernos ( ICREA Research Professor and European Research Council Scientific Council) explains in this video what can European Research Centres do in order to achieve gender equality. She presents, as good practices, the outcomes of the LIBRA project (which it is in an early stage of implementation) and the ERC’s gender balance working group. She then uses her field of research, Biomedicine, in order to illustrate why it is crucial for excellence and quality to include a gender approach to science.

In this video, Dr. Claartje Vinkenburg (independent Consultant & Associate Professor at VU University Amsterdam, Netherlands) explores different issues that become barriers for women's advancement in academia. For example she highlights the lack of real meritocracy in these type of institutions or the consequences of combining care and research. She, then, offers a list of creative solutions for adapting academic careers to diversity.

Rachel Herbert (Senior Market Intelligence Manager, Strategy at Elsevier) explains the main characteristics of the field of Gender Research according to analysis produced by Elsevier, one of the most popular information and analytics companies in the academic field. In this video Herbert exposes why Gender as a research field is growing relatively more than other disciplines, what are the countries leading this growth and its shape, networks and main topics.

What is the Gender Paradox in Nordic Countries?

The “gender paradox” is a concept that describes that even if Nordic Countries achieve great rates at gender equality indexes, when focusing on the Research and Innovation field they rate at the European average (and sometimes below). In this video Strandberg addresses the causes of this phenomenon and the actions taken by Nordforsk in order to tackle it.

Professor Giampiero Favato, from Kingston University London (UK), is an specialist in Health Economics who argues that gender neutral health economic models create unsuccessful and expensive health policies. Taking as an example HPV vaccination he suggests adopting a gender approach to health economics discipline. In this video Prof. Favato expands on this argument and reflects on how health policies based on health economics can be better informed by a gender perspective. .

Jeff Hearn, Professor on Gender Studies at Örebro University (Sweden), partner of GenPORT (ST&I) analyses in this video what masculinities have to do with STI. According to him it is crucial, first, that boys and men recognise that they are gendered and socialised in masculinity. He then expands on how the STI field is contstantly sourrounded by the values of masculinity and what can be done in order to correct it.

Sexualities in Science, Technology and Innovation

On the International Day against Homophobia, Transphobia and Biphobia, 17th of May, Jeff Hearn, Professor on Gender Studies at Örebro University (Sweden), partner of GenPORT, offers this talk on sexualities in science, technology and innovation (ST&I).

Sexualities in Science Technology and Innovation from GenPORT Project on Vimeo.

Professor Kumie Inose,Vice-President of the Science Council of Japan, offers a first-hand overview of the situation of gender equality in science in her country. She speaks about both, the progress achieved so far through public policies as well as the key challenges that remain for making science truly  gender inclusive in Japan.

Preconceptions based on gender stereotypes are still present when it comes to the assessment of men and women in research. On account of the unconscious application of biased societal patterns, such processes may occur unintentionally and without awareness.

How to introduce gender equality measures in research organizations

In the following video interview, Lisbeth Øyum and Tove Håpnes both